I want to see Crawl…. *groan* (at the time of this post the 2019 action/horror about giant alligators has no DVD release date…)

I’m currently working on an art piece comprised of iconic images and one is of the 2019 movie Crawl which stars one of my favorite actors, Barry Pepper. This inspired me to make a post about the top 5 movies that seem to land on quite a few “worst of” lists but are nostalgic to me.

5. Battlefield Earth (2000) was a movie inspired by an L. Ron Hubbard novel about a future when humans are enslaved by an alien race but once the humans start to discover their history they develop a plan that ultimately allows them to destroy the alien’s home planet.

I never read the book, but loved the idea that all humans need is to discover the strength and power of our past in order to succeed. Stop fighting, stop living in an ‘every man for themselves’ mentality and work towards a goal.

I’m not too familiar with Scientology so I’m not sure what this has to do with the religion. but I have a feeling that the connection is the reason why it’s always mentioned in the worst movies of all time.

It’s worth a view if you ever have a chance.

4. La Mission (2009), was a small film that struggled to get any kind of release. Made during Benjamin Bratt’s time on the series ‘The Cleaner’ (where he played a recovering addict,) the movie features a few of the same cast members. In ‘La Mission’ he played Che, a widow, single father and recovering alcoholic- and SF Muni bus driver!

Filmed in my hometown of San Francisco, it is a true tribute to the new millennium. Che has a teenage son who is gay but feels like he needs to keep it a secret since homosexuality is not part of the Hispanic culture.

A friend of mine had a similar situation (he was gay, Hispanic and deathly afraid of coming out to his family), so I feel this mindset is very true of 2009.

When Che meets his new neighbor Lena he thinks she’s just part of the ‘yuppie, Starbucks drinking’- generation that is destroying the SF Mission district. But she’s actually a deeply spiritual person with a dark past, and they are more alike then Che realizes. Through their friendship, Che learns how to truly exist in this new age, accepting the world around him with a grateful heart. 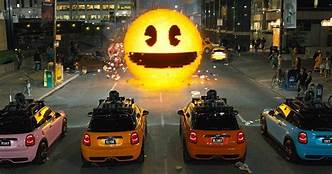 Adam Sandler is Sam, a child star video game champion in the 80’s, before his one embarrassing loss that leads him on a downward spiral into depression. As an adult, he works for Best Buy and has a talent for electronics. Out of nowhere an alien force sees images of 1980’s/90’s videogames and sees it as a threat. Now aliens have sent down weapons in the form of old videogame characters who must be defeated in the SAME way as their actual games.

Sam, under the authority of the US government, leads a team of former champion gamers (the best of Pac Man, Donkey Kong, Caterpillar, etc,) former child prodigies who’s lives had since taken a turn for the mundane.

This team is given the chance to show skill, courage, and teamwork, but best of all they get to live the dream of being valued and praised for their skills. the ending is one of inspiration and hope, a true love letter to gamers of all generations.