A re-edit of a previously unpublished fanfic: 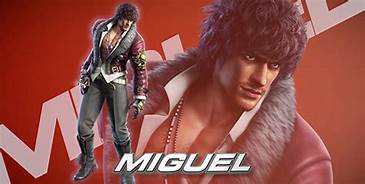 He slammed his fists into the pavement. So close, yet so far. The Mishima Zaibatsu; the man who killed his family: Jin Kazama, it all just slipped away. Would he ever get a chance again? His mind was racked with anger and frustration. He screamed, crying out to God or whoever could answer his prayer for vengeance.

A single bullet rippled through the air, hitting him in the back; a clean shot if there ever was one. Many months later he would learn who nearly killed him, but right now all that mattered was the beauty who came to his rescue.

Julia had been on the trail of Nina Williams; the world-famous personal assistant of Kazuya Mishima, but the sight of the dying man caused her to change her plans. After all, maybe he would have information that would prove helpful to her cause.

The hit was so clean it did not leave blood on the ground, it was a “poison dart” of sorts, meant to release a toxin that would destroy nerve tissue then make its way to the brain. Luckily Julia had encountered these before.

Miguel awoke (in what looked like an abandoned church), to a searing pain coursing through his back.

“I cut the bullet out,” said a soft female voice.

He tied to sit up but felt too dizzy and felt back on the hard mattress. “rest, you have a slight fever.” she said. He tried to swallow but his throat was painfully sore, but he spoke anyway.

“Julia Chang,” she said confidently. The name meant something, even to Miguel; she was famous in the Tekken tournament as the pro-wrestling environmentalist. “And you are Miguel Rojo”. She placed her hands on his chest applying a cooling compress of medicinal herbs.

He could feel his breath stabilizing.

How long has he been there? Why was she so willing to help him? He would find the answers in the most unexpected places. he closed his eyes and slipped into a deep sleep.

“brother?” the voice from the shadows was unmistakable.

“Am I gone?” he asked, as he tried to reach out to the figure.

“No, dear brother, it is not your time; you are destined for great things.” The ghost kissed his forehead. “You just need to learn to trust people- and you will find great allies.”

He opened his eyes, it was evening, the church was lit with torches and candles. Julia came back in the room. “You’re awake,” she said with a sweet smile. “I went shopping.”

“Yeah, don’t worry you’re safe here,” she casually assured him as she opened her bag, “I bought you new clothing- something less conspicuous… well kind of,” she added as she pulled out an orange shirt, green pants, and boxers that said ‘luchador’ for some reason.

Seeing how sorry she looked, he wanted to be nice; as an act of friendship and trust he started to change into the new clothes as he walked outside. “so where do we go from here?” he asked.

The night air, lightly foggy, ripped with energy; because with this team, anything was possible.

“So, where do we go now?” the tall strong Spaniard turned to her. He was willing to put his trust in Julia, but what was her plan?

“Well, I’m glad you asked.” She pulled out a smartphone- or at least that’s what it looked like. “I’m heading to Mongolia, that’s where I will find what I’m looking for.”

“Your research?” He had already heard of her forest regeneration project; technology that could grow life where there was none. (He also knew what the Mishima Zaibatsu was currently using it for.)

“There was a reason I let them keep it,” she said as they headed to her car. It was a small van; large enough to keep lots of supplies but ordinary enough to go undetected.

“You LET them keep it?” he said as he opened the passenger door. He could see the dried blood from when she had first hauled his body to safety.

“You get more flies with honey,” Julia said as she got in the driver’s seat. “Whenever I have had the opportunity I take a copy of what they have accomplished through their ‘biological enhancing’ program and use it towards my botany samples.” She turned on the engine with a casual attitude. “So, will you be ok to drive?”

He sat up with a jolt. “We’re driving from Europe to Mongolia?!”

“Yeah, and if we take turns we will get there faster.”

This sounded like a horribly stupid plan, but he needed to give her a chance “What’s in it for me?”

“I have been able to hack their system 4 different times, but each time I get only as much as i can download from their central servers in 60 seconds. But if you accompany me, as my backup, I guarantee I will get you the locations of all the safe-houses used by Jin Kazama and his pointy-haired family.” Julia turned to him with a smile. “And then it will be your turn to make a plan.” Julia pulled her hair into her signature ponytail and put on her glasses, prepared for the long journey ahead.

They traveled in silence for the first few days. Only the voice of Julia’s GPS system could be heard, as the pair switched every 8 hours or so to sleep. As they crossed into the desert of Asia, Julia decided to stop to rest for an entire night. “We should talk about something,” Julia suggested. She pulled off the road, deeper and deeper into the desert sands.

“I thought maybe we could take a break from driving, maybe make camp out here and sleep a full night.” Julia took out a campfire meal, the kind that required actual hot water. Up until then, they had been surviving on food that came ready to eat (like various candy and protein bars, with just bottled water to wash it down.)

She parked the van near a large stone, to supply a little wind resistance, then tried to start a fire with old papers, rocks and a lighter. It was a bit of work with such a small amount of printer paper (and possibly a little toxic,) and for some reason, the printer paper did not catch fire as easily as she thought it would. But eventually, she had a large enough fire to put a pot on for hot water.

“Is that how you do things in Arizona?” In the time it took her to make a fire Miguel managed to locate actual wood pieces.

“I didn’t think we could locate plant life in our current location,” she said as she put a little bottled water in her metal pot.

“You never know until you try.” Miguel sat down and shifted the fire so it looked more like an actual campfire. He put the lid on the pot and used a larger branch to place it in the fire. “So, what did you want to talk about?”

Julia thought of the most generic question possible, “Do you have anywhere to come home to?”

“Not really.” The days he’d spent in her van was the closest thing he had to a home in a while. “When your family hates you, you can’t stay in one place very long,” he said out loud. Years ago it would have been painful to utter those words, but now the wounds had long scabbed over.

He looked in the van for a blanket to sit on, as to not get sand on himself.”Can I take this?” he asked as he took a red blanket from the sleeping area of the van.

“Sure”, Julia replied as she rubbed her bare arms and sat close to the fire, checking to see if the water was boiling. She was not cold, but the warmth still felt nice.

“How about you? How often do you go back to Arizona.” He noticed she looked cold. Out of some kind of gentlemanly instinct he sat down, wrapped the blanket over her and pulled close.

Julia could feel the warmth of his body and it made her shiver more than any desert night. Was she shy? probably. she had plenty of male friends, but Miguel was different, he had a beauty to him that cut to the soul. “Too often.”

“What?” he thought that was a strange answer. After all most of her time was dedicated to her research, so she must find that place a little enjoyable.

“..because it’s beautiful and inspiring. I’d love to take you there someday.” She forced a smile, stopping herself before she said something she might regret.

check out more at-
Deviantart