“Do you have something against humans?” Elena asked as she walked with Kaylinani on her shoulder. The little plush-turtle still looked adorable even if it was just a disguise for the immortal turtle goddess.

“Only the propaganda that your kind represents,” the turtle replied telepathically as to not break character on the crowded beach.

“Propaganda?” Elena walked as quickly as possible back to the hotel, trying to draw as little attention as possible. Soaking wet, in only her t-shirt and underwear, Elena assumed she looked like a crazy homeless person.

“Yes, your writers and artists telling of a perfect world that lies beyond the ocean.”

They made it to the hotel. Luckily it was late enough in the morning for the elevators to be empty; everyone was either at breakfast or already on the beach.

Kaylinani continued her rant. “My brother grew up with images of the humans, their music, their art, their culture. To him, you were heroes or even Gods. So when mother asked if he wanted to go live among your kind, as your friend, he jumped at the chance.”

“I’m sorry,” Elena muttered. They reached the door but Elena already knew Isaiah would not be in the room.

“What’s wrong? Where is my brother?”

There was a trail of water leading from the bed to an open patio. Elena released the turtle to go investigate. But as she did, Elena felt a painful blow to the back of her head.

Elena paid her no mind. “Isaiah?”

In his human form, Isaiah’s body lay on the floor, blanketed by palm leaves from trees that had no business growing anywhere near the fifth level balcony. “Hey Lena, I see you’ve met Kay.”

The palm trees pulled away, allowing Kaylinani to land on his tan, muscular chest. “Isa! What have those awful humans done to you?”

“Nothing, Kay,” he said, running his fingers through his long dark brown hair. “I’m just a little tired.”

Elena had to admit he looked healthier than when she left him. Perhaps he was telling the truth.

“You can’t stay here, their world is killing you. Please, brother, return to the ocean with me. I’ll care for you the way I always have.”

“No,” his eyes closed as he bathed in the warmth of the sun. “I can’t go back.” he reached his hand to Elena beckoning her to lay beside him.

She rested her head on his shoulder. She could see Isaiah had one hand on Kay’s shell stroking her wings.

His other hand reached out to Elena. “Do you want to know what my life was like before I became human? Hold my hand, close your eyes.”

Elena closed her eyes and was transported to an underwater scene. It was like something out of a movie; the world was illuminated by glowing plants but this society also appeared to have access to modern technology. There was what appeared to be wi-fi coursing through certain plants, allowing for images to be broadcasted. And there were sounds everywhere; music, languages, it was all most too much to take in.

Kaylinani, in her larger stone-turtle form, came into view. “Come on Isa, let’s get out of here.”

Elena now realized she was looking through Isaiah’s eyes. Swimming towards the surface Elena watched as her eyes passed the windshield of what used to be a car. She saw a baby turtle with big brown eyes; Isaiah’s eyes. His shell was blue the color of Isaiah’s denim jeans. And his pure white wings sparked like the most precious of jewels. “Wait for me, Kay,” squeaked Isa’s little voice. “I want to show you my new painting!”

“Fine, where is it this time?”

“In the cove, by the tide pool.” Isa started to dart off in a different direction.

“Did you say the tide pool?” Kay shouted after him.

In the blink of an eye, Elena was inside a tide pool, looking up at dozens of children’s hands. Some were picking up painted stones. She could hear laughter and giggles.

Kay grabbed her brother pulling him behind a rock. “They’ll see you!”

Isa went into a nearby cave where he pulled out a flat rock. “I made this one for you.” On the rock was a pink starfish. It was clear he had painted it using pigments made from coral, perhaps even algae or sand.

“Patrick and SpongeBob are best friends and you’re my best friend. Do you like it?”

Elena opened her eyes, she was back on the roof with human Isaiah holding little Kay on his chest. That was when she noticed the tattoo on his arm, a pink starfish. He had the tattoo when she first met him but only now did she know what it meant: part of him would always belong to the ocean.

Elena was about to speak when Isaiah opened his eyes. “Father lives in the clouds, I can feel him. I want to live in the clouds.”

Elena laid by his side for the next few hours. His body seemed to be regaining strength either from Kay or the sun itself. It made sense. Working at the department store he had been stuck inside the land of fluorescent lighting for ten hours a day, only to come home to a hotel room with not much more to offer. “You deserve to be in the sun, light, you deserve to sparkle and shine.”

“Did you mean to say that out loud?” he asked in his sweet surfer voice.

Elena blushed. She had not.

Isaiah glanced at Kay’s sleeping plushie form before turning his head and whispering in Elena’s ear. “I want you to touch me the way you would touch your husband.”

To avoid getting hit again Elena stood up on her shaky legs. “I’m going to get us something to eat.” She was in too much pain to take a shower so she simply changed into a dry t-shirt, paired with a long floral-print skirt.

She made her way to a Chinese take-out place that offered vegetarian options. It may have been Vietnamese, she wasn’t cultured enough to know the difference. All she knew was, the food was cheap, edible and the last time she brought it home Isaiah was able to eat without getting sick.

Elena took a long way home, walking along the beach with the plastic carryout bag in her hand. Kay wasn’t wrong, humans were terrible. He deserved better than to be stuck with a soon to be a homeless widow. By the time she made it back, two hours had passed. The food was cold but there was a microwave in the room.

She opened the door to the sight of Isaiah painting on several rolled out spools of craft paper. “Did you rob a printing press?”

Isaiah didn’t answer, he was locked in a trance, finger painting with dozens of vibrant colors. He had pots, shells, and other containers all around him. Some of the pigments were liquid, others powder, a few appeared to be glowing.

“Isaiah? Where did all this come from?”

“Kay brought it for me.”

“Kaylinani? Where is she now?”

“Kay had to return to the sea, to recharge her powers,” he said as he stroked a bright green across an ocean of blue. “But she’ll be back, especially since she knows where to find me.”

“Great,” Elena groaned as she put the food on their bedside table. She took a seat beside Isaiah to admire the near limitless details of the painted landscape. “Is this your home?”

Isaiah dipped two fingers into a shell of green paint and stroked the vibrant color on to his leg. It was one of many colors that streaked his skin, creating a pattern much like the multicolored skin of a sea turtle. “You could say that.”

That was when Elena noticed he was naked, his body covered in streaks of color. It was clear this was a meditative, possibly healing process. “It’s really beautiful.”

Elena stood up to leave him be. but Isaiah grabbed her hand. “Lay down,” he said making a sweeping motion over a section of the painting that looked like a coral reef.

Elena did as he asked. The paint felt sticky on her hair and t-shirt. She closed her eyes to try to calm herself when she felt his hands slip under her shirt. “Isaiah?”

He was undressing her, coating her body with his pigment covered hands. “I want to paint you into my world,” he said in a soft moan as he slipped the t-shirt off her arms. He massaged his hands over her breasts, painting her skin a dark green. He traced his fingers down her hips, to the waistband of her skirt. He slipped it down to her feet.

“What happened to your legs?” Isaiah asked as he stroked her inner thigh.

Elena giggled nervously. “I-I had a run in with a few dozen jellyfish.”

“My poor little flower; you injured your fragile, mortal, body trying to bring help.” Isaiah bit his lower lip with a flirtatious half-smile. “Let me help you.” He took a handful of a glowing neon yellow pigment and gently stroked Elena’s legs until her skin shimmered. “How does that feel?”

His touch felt like a warm massage but the true heat came from his body straddling her hips. “That feels incredible.”

“You humans are so beautiful,” he said with a sigh. “I’d rather die a human than live forever in the sea.”

Elena was stuck with an awkward realization: was Isaiah about to make love to her, in order to anchor himself to the human world? She looked up at him, their eyes meeting.

He smiled back at her. “I already told you what I want.” Isaiah suddenly recoiled his hands. “This is what you want, right? I mean do you want this too?”

His innocence was so lovely it was all Elena could do not to cry. “Yes, I want this, I want you.” She reached out her trembling fingers to caress his cheek. “I will find a way to keep you safe. You won’t have to work at the department store, we’ll find a path that will let you spread your wings, I promise.”

Hours later she awoke, by the light of the moonlit window she could see Isaiah’s beautiful body, his true form. His legs, up to his hips were covered in dried paint that shimmered in shades of green, blue and gold. And then there were the wings, his large white wings that appeared to be held together with cartilage and bone, similar to bird wings. Isaiah was the prince of both the heavens and the sea. And he was Elena’s to love.

Elena smiled but her smile faded as she saw a small plush turtle sitting on the balcony, staring into the room. Still nude and covered in paint, Elena stood up she looked at the turtle and pulled the curtains closed. 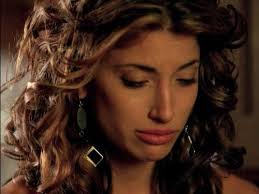