Previously on Rain Down Temple

And as usual here is the link to the NSFW version.
or continue with this edited version-

Diego awoke to the sunlight tricking through the beaded blinds. Rain Down Temple was so beautiful in the early morning. It had been nearly a month since he first arrived, he had never felt better.

Gazing at his reflection in the window, Diego stroked his salt and pepper beard. His facial hair had grown out, revealing his age. He, admittedly, would dye his hair when at home, if only to appear professional to potential real estate clients. Looking at his reflection in the window he looked rugged, disheveled, perhaps even a little homeless, but he looked like his real self. For the first time in perhaps years, Diego felt at peace.

A few days ago he had to say goodbye to his student, and good friend, Sara Foster as she set off for college in California. On the bright side, he was able to show her the new tattoo he got in her honor, to go with his ever-growing collection. Thoughts of saying goodbye to dear friends brought about feelings of loneliness.

“Remy?” Diego stretched his back and looked at the empty space in the bed. “Right,” he chuckled to himself. Dr. Remy Desilva and his staff did not actually live at the clinic. Diego’s condition had improved the point where he did not require around-the-clock care. His actual alarm clock went off at seven am the small bell ringing from the side of his bed. But just as quickly, it was silenced. Diego stood still, letting the warmth of the sun caress his skin as he opened his robe. “Remy? Is that you?”

“Who else would it be?” answered the young doctor in his usual laid-back surfer voice. He put his arms around Diego’s waist, letting the robe fall to the floor. Remy’s shoulder length hair brush against Diego’s cheek and he kissed his lover’s neck. “I missed your gorgeous body.”

Diego moaned. He felt tingles covering his skin as Remy’s soft lips sucked on his, neck moving up towards his jawline. At 6’2″ Diego’s body was naturally large but without access to his home gym, vitamins and protein powder his body had transformed to become slender and strong. “I’ve missed you too.”

“Your beard smells so good. Have you been using the stuff I brought for you?” Remy had surprised him with a ‘body oil’ meant to soften and moisturize facial hair. With the sweet scent of orange and clove, Deigo had taken to using it on various other body parts, much to his lover’s visible delight.

Remy kissed Diego’s lips while tracing his index finger along the wrinkles under Diego’s eyes. Deigo knew the lines became more prominent when he smiled but at that moment the expression was unavoidable.

Upon seeing him smile Remy paused, looking deep into Diego’s eyes. “I think you should move in with me.”

Diego chuckled. “And your housemates?”

“The house is huge, plenty of space.” He kissed Diego’s lips pulling him towards the bed. the beds at the clinic were queen-size mattresses, as opposed to typical hospital beds. the perfect size for making love or even holding each other, but not so ideal for spending the night. “What’s the matter?”

Deigo leaned back on the bed, spreading his legs. “I didn’t say anything.”

“You didn’t have to,” Remy paused, stroking his fingers down Diego’s stomach. His body was soft but strong. “What’s wrong? Are you concerned that all of your personal effects are at your house? Your expensive electronics, your real-estate contacts, and of course your clothes. But I have to admit, I prefer you like this.”

Diego ran his fingers through Remy’s hair, massaging his scalp as the young doctor rested his head on Diego’s lap.”Did you really come to work at seven in the morning to kiss my stomach?”

“I like to take my time.” Remy positioned himself on the bed. “Do you know how difficult it is to drive a biodiesel stick shift with a raging hard-on?”

“It’s been a while,” Diego replied with a chuckle. The two made love until their bodies lay exhausted.

“Every night that we’re not together, I lay in bed naked thinking of you.” He leaned in to kiss Diego’s lips. ” I can jerk off until I’m numb, but nothing compares to the warmth of your body.” Remy nuzzled his lips to his lover’s ear. “So what do you say, D?”

Taking Remy’s advice Diego would, that day, leave his past behind him. Although he was taller then Remy, his roommates had a few items of clothing that fit; loose fitting items such as ponchos, robes, wraps. But he did prefer to walk around in the nude, to meditate and pray.
A week later, He was just beginning to rediscover his soul, his happiness when there was a knock at the door. Bang! Bang! Bang! “Open this door, Diego, I know you’re in there!” Suzanna’s voice roared.

Diego knew he at least had to speak to her. He put on a pair of Remy’s sweatpants and took a few deep breaths as he opened the door. “Hello, Suzanna.”

Suzanna met him with a hard slap to the face. “Well, you look like trash. Are you coming home or not?”

Diego could have said anything. he was not a child, he did not have to go with her, but her next words cut him to the core. “I-”

“Maybe we can cut our son’s grave in half.”

“Excavate Cam’s remains, create his body and split the ashes- that is if you even care about our family.” Suzanna wiped tears from her eyes. “We’ve been through so much, you and me. I need you.” She reached out and stroked Diego’s face, her touch soft and gentle. ” I love you.”

Suddenly Diego heard Remy’s car screeching into the driveway. “No! Stop! D, please! you don’t have to go with her!”

Diego shook his head. “I do. I’m sorry. I need to make things right.”

Remy was sobbing, he bit his lower lip as he nodded. “I understand.” he got back in his car and drove away but not before mouthing the words. ” I love you.”

Diego knew Remy understood. He needed to do right by his wife; to leave her emotionally and financially stable. He owed her that much. He had a plan to work towards a mutual, uncontested divorce but all that went to hell when she invited him back into their marital bed. Diego forced himself to make love to her, fully clothed, with only minimal body parts exposed. Even then he closed his eyes. In the process of making himself comfortable, he may have called out Remy’s name.

He awoke alone the next morning. His wife was in the kitchen cooking breakfast but he felt sick. He limped to the bathroom and kneeled by the toilet expecting to vomit but all he felt was a deep throbbing pain. He laced his hand under his shirt, lifting it to reveal the same bruises as the last time he was home.

Days passed like weeks, as Diego’s body grew sicker; nausea, vomiting, and severe muscle pain including back spasms. He starred up at the white stucco ceiling, unable to recall the last time he left his bed. He had no appetite, no need for the restroom. His body felt nothing but pain. Did his wife truly intend to kill him? No, he refused to believe it. The woman he married did not possess that level of cruelty. But then why was she leaving him in such a state?

Throughout the day he heard his wife talking on the phone. Some conversations were with real-estate clients, but he could also hear her discussing his medical condition; claiming he was sick with the flu. Was she trying to set up an alibi with his actual medical team?

Every night Suzanna would crawl into bed by his side, holding him close until he fell asleep. Despite his physical and emotional discomfort, Diego would always experience a deep pleasant sleep. 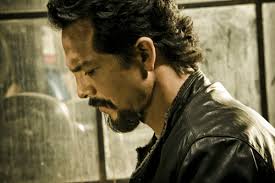 That is, until the night of the break-in.

He opened his eyes in the darkness, to the sound of glass shattering, some sort of fizzing sound (like an aerosol spray), footsteps then finally muffled speech. “Fuck this! Remy, the police are going to be here any minute, I’m not going back to prison for your little rescue mission.”

“What are you talking about, Jordyn, there’s not even an alarm.”

“Ever hear of a silent alarm, dipshit!” Jordyn was one of Remy’s housemates. If Diego was not mistaken, the man worked as a contractor.

“You volunteered to help me because you know in your heart this is the right thing to do.” Remy lifted Diego’s body in a fireman’s carry.

How was Suzanna not awakened? Diego caught a glimpse of Jordyn’s face in the moonlight. The two men were wearing gas masks. “What the?-” Diego lost consciousness, waking in Jordyn’s van.

“We need to get him to a hospital! She’s been drugging him, I knew it!” Remy said to Jordyn who appeared to be driving.

“No, ER staff will call the police and we’ll have to give a statement as to how we broke into your lover’s house and kidnapped him after filling the vents with an illegally obtained sleeping gas!”

That explained a lot. Diego fell into a deep sleep. He assumed he would be taken to Rain Down Temple, Remy’s clinic, but instead he awoke hours later in Remy’s bed. The light of the sunrise cut through the window shade, making Remy’s mural of the northern lights look even more majestic. But not as majestic as Remy’s naked body,
his tan skin glowing with the light of the morning sun. Diego, still fully clothed in his white pajamas leaned over for a kiss.

Remy opened his eyes and smiled. “I was dreaming of you.”

“I was dreaming of your as well, my love.” Diego kissed Remys’ abs. To his surprise, he felt strength, passion; the complete opposite of how sick he had been the day before. As Remy’s body tensed with pleasure Diego knew exactly what he wanted, to open his lover’s body like a flower.

“It’s easy to be skilled with a lover as delicious as you,” Diego said between breaths. “Tell me what you want from me. Tell me how to love you.”

“I love you.” Diego kissed him deep penetrating with his tongue.

The men made love face to face, focused on each other’s lips, lost in each other’s eyes. Diego could feel his orgasm building with every thrust.

Remy’s thighs were quivering, as he struggled to hold himself as open as Diego wanted. He gripped Diego’s back, forcing deeper penetration.

The young doctor reached out his hand to caress Diego’s cheek. “What will it take for you to stay?”

“I will need your strength, your courage.”

“Then you shall have it. Along with my compassion and never-ending love.” Remy pilled Diego close. “You are mine and I am yours for as long as this dream may last.”

Diego smiled, with tears in his eyes. If this was a dream he prayed to never awaken.

Hawaiian sweetness,
with just the right amount of Chicano spice
brewed together in a cup of tea
boiling over with a passion,
hot enough to induce hallucinations

dream on
Dream lover,
dream on

Check it out on:

AND- Free for a limited time on Bookgrabber