Guess who got fired! I didn’t drink any more than I usually do but for whatever reason my liver said. “Nope!- end of the line.” and a certain person reported that I smelled like alcohol. This person also reported a little old lady for putting in a fake number for a credit card application because the man was threatening her- but that is neither here nor there (just, as a society, we need to try to show a little compassion before going straight to HR. )

As I waited in my supervisor’s office to for a tax to take me halfway across town to get a breathalyzer test I drank a bottle of water. An immediately vomited it back up. I knew something was wrong. So after I failed gloriously I asked the taxi driver to take me straight to the emergency room.

I told the Dr my symptoms; I could not hold down food, I had a constant pain in my back (that I think was my liver begging for mercy.) She got me a place in a detox center. I stayed for 5 days –

Day 1- Everyone here is helpful and kind even though 2/3 of the patients are inmates and 8/10 are detoxing from something worse than alcohol. I made the mistake of packing clothing. Like a prison (or a psych ward), uniforms were provided. The first day I was told I would feel groggy. I did, a little. But not as groggy as the girls who appeared to be sleeping deeper than a certain Disney princess. Since I arrived after dinner a fellow patient told me about the freezer full of microwave dinners. Little did I know those were a luxury.

Day 2- l slept ok. Just like my pre-addiction, I was constantly awoken by muscle spasms in my legs. Breakfast was 6 am so I made sure to take my ‘take on an empty stomach’ pills before I went to bed. Now was the moment of truth; could I keep down food at 6am? Breakfast was an egg, potato, and sausage scramble. I finished about 1/3 of it. My liver hurt, but I made through. During group therapy when we were asked what were most grateful for I said, I was grateful for the fact that this was the first time in 4 years I have been able to eat breakfast that early without puking. That was when I met, I’ll call him Bones (because that was what I originally thought I heard his name as.)

Bones told me he really believed in me and he would keep me in his prayers. That sounds cliche until you hear his story. Although he looked about 30 at the most he told a tale of leaving behind his high school sweetheart, traveling the country as a roadie only to end up in San Francisco 20 years later. He said he spent the majority of his life blacked out and he even had no idea how he got to the detox center. He was sweet and funny but he had back to back court dates for assault and disorderly conduct so after day 2 he never came back.

Then there was another sweet old man who gave me his box of colored pencils. He had to wear an ankle monitor that he had to plug in every night. He was, in his own words, being charged with “Drunken disorderly Mayhem.”

Day 3- Back hurts but not in an ‘I fucked up my liver’ way, it hurt the same way everyone’s back hurt. The mattresses sucked. But now instead of my previous problem of not being able to finish my food I have come to notice the kitchen staff gives all the patients baby portions. I slathered my 1/4 of a waffle in butter and jam just to feel full.

A mystery boy and a mystery girl arrived. I heard the director say “Keep Sean away from Seven.”  So I guess that was her name (or vice-versa). When I asked why they were not properly introduced like the other newbies the director said, “They’ll be gone soon enough.” Either way, the mystery girl seemed nice. I gave her some binder paper and a few of my pens. She was writing letters for the majority of her time.

Seven was still awake when I got back from the latest of the daily “mandatory AA” meetings. All of which consisted of a speaker talking about how he started drinking when he was a teen because it was fun. Then whenever he tried to stop (or got out of jail) he would go to his BFFs who would – guess what – wanted to celebrate by taking him drinking.

This was so stupid because that was not why I started drinking. I started drinking because of stress. Stress from my husband’s illness, stress from the unrealistic expectations at my job. Drinking was never a recreational activity. It was a way to press the power button in my brain and shut down for the night. But all speakers talked about drugs and alcohol like candy- all you had to do was stay away from users like yourself.

I came back to the barracks and shouted “These meeting as bullshit!”

Seven replied, “Those fake AA meetings are nothing compared to where they’re sending me.”

The day ended with the arrival of Jose (and a few others,) but he would be my inspiration.

Day 4- Sean and Seven were gone. Jose sat with me at breakfast. He said he couldn’t eat. I asked him what meds he was on, he said he wasn’t on anything. He just needed a break from drinking. He quit his job as a sous chef to come to detox. Breakfast was loaded nachos; the leftover egg scramble served over chips with salsa and sour cream- total cringe even for someone who wasn’t a trained chef.

We spend all day talking, he taught me how to play poker and rummy. And for fun I delt the deck for blackjack 21. He told me about his dreams of working at an Indan place or even opening his own restaurant. He even shared a recipe with me on the back of my notebook.

I was so worried about the logistics of achieving my dream, of getting my novel published that I never realized all you had to do was jump in the pool with both feet. -Blessed are those who can look to the future even with a sense of fear.

Day 5- He was gone. He wanted to go so he left, he also told me he could see himself living there for a month if we were allowed in and out privileges. Not to meet with lawyers or caseworkers, but just to walk. And if the people in charge had a problem they could make us pee in a cup. Me, I kept up with my writing and drawing but I was getting sick of drawing inspiration from old magazines. So I went for a walk. I was met with “security” who asked. “Are you from the detox center? Because this is the main center, you are only allowed in the detox center.” I want to draw the fucking flowers. Then a second person came. “You have to come with me.” The 2nd person told the cunt who ran the center -who then repeated back, “You are not allowed to leave the detox center.”

So I turned to the VA medical center representative, who is on staff at all times to make sure the veterans are being taken care of (because this shithole is being paid for by the government.)  He LOVED to say ‘this is not a jail’- so I said to him- “I’m leaving.”

Miss Cunt kept barking orders at me like “Did you strip your bed and put everything in a bag?”
me- ‘no because I don’t own a trash bag.’ VA rep brought me a bag. So I stripped my bed and put the bag in the hallway.
Cunt- ‘Those go in the laundry room.’
I left them in the hallway and looked at the VA rep- ‘I have worn the same underwear for 5 days because no one told me about a laundry room or even a laundry system.’
And finally, she tried to ask – what is your stated reason for leaving?

me- ‘I have five pages of diary entries that I will share with my counselor at my appointment next week.’ She repeated her question. And I knew why. The fact I was leaving meant loss government funds.
So I call over a patient, a large (he had to be at least 6’3″) elderly man who was nothing but kind to me and I ask for a hug while I cried on his shoulder. “I miss my husband, I miss computer, I miss my art, this place is a prison, there is no place to be alone. My soul feels like it’s rotting– please tell her SOMETHING because I CANNOT put into words how badly I want to leave.”

At first, as I stood by the outside door, it appeared as if she was not going to authorize the buzzer to open. But after a while, she took the hint. I headed home to work on my art and my writing. Working towards getting my novel published. -Peace out. 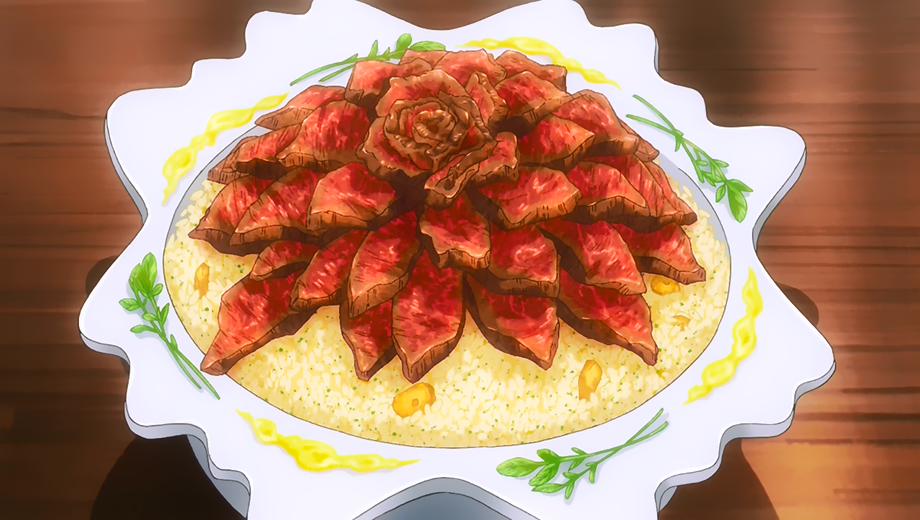 (Yes that’s an image from Food Wars. my IRL photo did not come out.)

-one container of button mushrooms (or two depending on how many mushrooms you like on your finished steak.)

-1 Tbsp each Cumin, paprika on each side of each steak after salt and pepper.

-Smallest can of adobo chilies possible.

-1 sprig of thyme or 1 heaping teaspoon (or to taste.)

First cut up the potatoes. Toss with salt pepper, olive oil and about a tablespoon of the chipotle sauce. If this turns out to be too much, that’s what the sour cream is for. Set that on medium-high with a lid and get to work on the steaks.

After trimming fat as desired rub each piece liberally with salt and a few grinds of pepper. Cover each side of the meat with a good coating of paprika and cumin.

Give the potatoes a stir and check for seasonings. If too spicy add the sour cream, if it’s fine to leave as is or add more of the chipotle (even with the smallest can, there will be leftovers.)

In a separate pan heat vegetable oil (Jose said olive oil but vegetable oil gets much hotter before burning.) You know it is hot when it ripples as you move the pan. Preferably using kitchen tongs, place the meat in a pan.

Now turn away. However long it takes you to slice your mushrooms is how long you give the meat. When all mushrooms are done flip the meat. Ideally, there should be a dark crust. Take the pan off the fire, prepare some foil and one large pat of butter per piece of meat. Wrap meat and dump the mushrooms into the dirty pan.

Jose said to deglaze with oil, but I  like butter. Add salt and cook down until tender. Slice the meat, arrange it over the potatoes (which should have a tender, home-fries texture,) and add the mushroom sauce.

Final step- present your dish like the superstar that you are-

3 thoughts on “Journey of Resurrection”